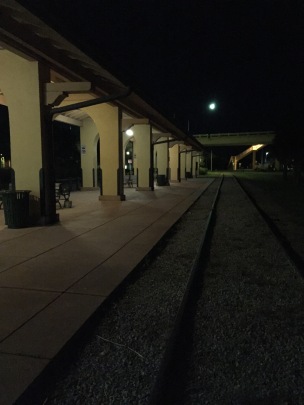 If the folklore of a town is both a reflection and the building block of that community, what does it say if a local legend can’t be confirmed, embarrassed or even really defined.  Venice is a strange area of Southwest Florida, not unique in its complexion or population from its neighbors, but a more of a mix of the personalities of the surrounding towns.  Like  the places that neighbor it, there is a balance struck between the old and the new, between generations of Venetians and recent transplants who seem in search of something the coastal towns of the Gulf promise.  Businesses drift between a touch of rundown quaintness and neon glitz, giving the whole area a sense of identity crisis.  However, anyone who is not new to the scene understands this is an identity, a bit manufactured based on what tourists expect but at the same time thumping with a heartbeat that connects the communities up and down the coast.

The story of the Phantom Train of Venice had that feel.  It was referenced in a book, but no one seemed to know about it.  Last year I spent the weeks leading into Halloween trying to track down the details and sent feelers out to the writer of the book and the historical society who maintained the site.  As I reported last year, no one was forthcoming with information or knew what I was talking about.  I still can’t make sense of the e-mail I received from Kim Cool when I asked her to allow me to walk in the footsteps of her research to try and track details down. 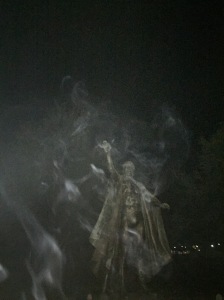 I had given up on it and moved on to other ideas.  The legend was not done with me, however.  In the weeks leading up to Halloween this year, some odd tumblers fell into place and seemed to draw me to Sarasota County.  The first was born of my own paranormal confusion.  Frustrated by what I was working on, I challenged the universe to give me a sign.  What followed was a series of random song generator moments.  In other words, I would start thinking about wanting to hear a song, and my Ipod would randomly play just the song I was looking for.  Hardly the concrete research of the Rand Institute, but it got my mind moving.  In the few days leading into the holiday, this happened so often I could not overlook it.  I was also seeming references to trains and Venice all over the place.  Cognitive bias to be sure, but the fact my mind wanted to see these things felt like a sign in and of itself.

Then came the dance.  I had written previously about the connection between Ringling and the two dollar bill.  To show the people of Venice his employee’s impact on the town, it is said he paid them all with two dollar bills.  At the end of the day, count them up and see how much they were pouring into the local community.  I became enamored with the idea of making that part of my trip there.  I would use the money as a type of offering or tulpa to jump start the activity.  Problem was, in the past I had a hard time getting my hands on one.  During my schools Halloween dance though a student paid for their candy and soda with a two dollar bill.  I pocketed it, making sure to stick two ones in the drawer, and was convinced this was the last sign to go out. 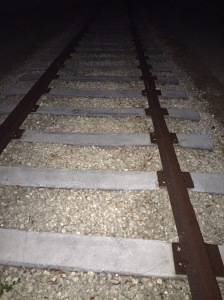 After I had said goodbye to my kids and their candy haul, I met up with my partner for the Legends Project, Natalie Crist.  It was an hour ride out to Venice, and we were cutting the time extremely short.  I gave her a recap of the legend and a brief outline of what we were going to do.  Natalie has an amazing passion for research and is a sponge for information, so speaking with her often allows me iron out the details of what needs to be done.

We got to the Venice Train Depot around 11:30 and decided to tour the area around it, including the nearby bridge that goes over Highway 41, a major freeway through Southwest Florida.  Our purpose was to get into character, but also to understand the sound complexion of the train station. 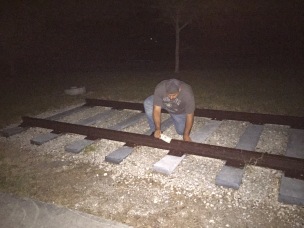 We were unsure of what we might see and hear and wanted to be able to tell the difference between a train blast and a siren or an elephant trumpet and any geese in the area.

We went live on Facebook counting down the moments leading into midnight.  We placed the two dollar bill in between the rails of the track, in between us, and placed our hands on the rail to notice any change in vibrations.  In retrospect, this would have also been a good time to do an EVP session, but I had not planned the night too well due to its suddenness. After about 10 minutes we left that area and walked the tracks before touring the whole area again, shooting a second Facebook live video, and heading home.

Here’s where the story gets exciting and I tell you about the lion who jumped out of the ether and the train lights that threatened to run us down.  Only, that’s not this story goes.  We did hear unexplained train whistles and later confirmed that no trains were running at that hour in Venice or the surrounding cities.  Natalie did get an odd scent of cinnamon at one point which was out of place, sudden, and fleeting.  But that’s about it.

…and also not really the point.  As an investigation, the trip would have been a failure, but as a legend trip, it was a complete success.  The difference between the two is hard to tell at times, like trying to split hairs over whether something is a legend or folklore.  The main separation might spring from the intention and what is considered a victory.  Tripping is about the journey and the moment, both of which were rich and satisfying.  Nothing happening is not a notch in the paranormal investigators movement to determining whether someplace is haunted.  Something did happen.  We touched a local legend and become part of it.

Here’s the new scam I’ve been getting quite a few calls on…
Dev’s response to this weekend’s #moviethemedinnernight…
Was able to sit down with @dan_myrick to talk about the #swampwitch and any connection to the #blairwitchproject…and got my original copy signed…
Set up for the first event of the season…and a little Blair Witch watching…
Real cool event Sunday night…and I’ll be selling books and spinning tales, including the Swamp Witch…
Why yes, Amazon…