Regina always felt close to her grandmother, Maria, living with her most her life, surviving tragedy together and sharing all of the best times of her life. After Maria’s death from cancer in 1989, Regina found herself feeling guilty over her death and saddened that her grandmother and friend would not be able to share the most exciting stage of her life.  She was dating the man she would eventually marry and soon there would be children.  “I think she would have gotten a kick out of my sons.  She never had a grandson except Paul and Michael a bit later.  She would have loved them.”

Lately Regina has begun to feel that Maria might not be missing out but is sharing her family’s lives in the apartment she used to live in.  Regina has felt her grandmother’s presence since her death, but since the birth of her second child and the boys moving into what was once her grandmother’s bedroom, the feelings have turned to physical experiences, and as the moments seem to intensify, Regina is left more confused than scared.  “It’s scary, but more or less positive,” says Regina, an energetic mother and cataloger at a library in Boston.  “Ever since she died there’s been a connection there.  What’s the message?  I mean, what’s the main purpose?”

Regina lived in the same house as her grandmother for most of her life.  After a fire in 1981 they were separated for a few months, but when her parents bought a two family house in Everett, Massachusetts, Maria moved in downstairs.  Regina would climb down the backstairs to her grandmother’s apartment to have tea and spend time talking.  When Regina left for college in the late Eighties, Maria became sick.  She tried to come home as much as possible, but the college was in Western Massachusetts and her grandmother was in and out of the hospital.  The night before Maria died, Regina had a confusing dream that seemed to trigger the connection between the two.  She dreamt of standing over her mother’s casket, her grandmother at her side.  The next day, although she was doing better, Maria passed away.  Regina never fully got over the guilt she felt about not being there, and it did not help when years later she heard her grandmother had responded to her absence by saying, “What, is geography more important to her than me?”

The first time she noticed something unusual about the apartment was shortly after her grandmother’s death.  She was staying there with some riends from college.  They joked around and watched scary movies, but some time during the night each of them experienced something they blew off until the next morning when they all told what had happened to them.  They each distinctly heard tea being made, from the sounds of things being moved to the clinking of the pot and the sound of the spoon against the cup.  Regina sees it as a sign of their connection.

“As soon as I would get home from school in the afternoon she would yell up the backstairs, ‘Are you coming down for tea?’  It was our thing.”

Four years later, now married, she moved in to the apartment.  Through the years she noticed small things but constantly pushed the idea aside.  “You look back and make the connection.”  There was often a smell in the apartment she associated with her grandmother, even though the apartment had not been lived in for years and her father had renovated the place.  They both would smell her grandmother’s perfume, White Shoulders, mixed with cigarette smoke, often coming from the bathroom.  Maria would often sit in the bathroom smoking and doing crossword puzzles.  Regina would also see shadows out of the corner of her eye and experience vivid dreams about her.  One involved Maria standing on the newly renovated upstairs porch, dressed in black, holding a baby, and eerily cackling.  She also woke up once to her grandmother in the room glowing white with angelic wings.  She felt it might have been a dream, but the next morning she found feathers in her bed. 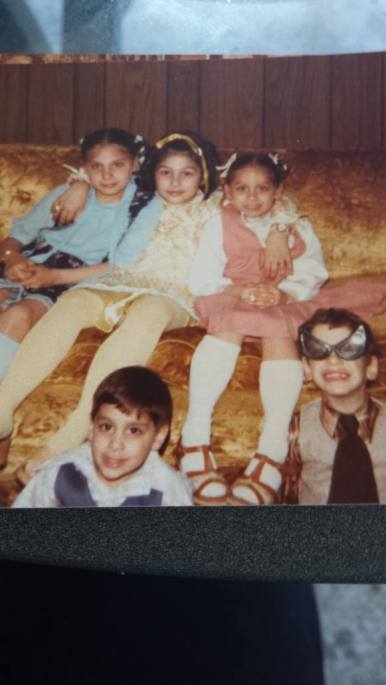 She attributed most of the dreams and experiences to her imagination and guilt.  When her second child was born, however, things began to intensity.  “When I had Anthony I needed more room so the two kids could share a room.”  She moved Anthony, and his older brother Tom, into the bedroom where her grandmother once slept.  Almost immediately things started to happen.  There was a fire alarm installed in the room that ran off the electrical of the house.  It started to beep as soon as the kids moved in, although her and her husband had lived there for three years without any noise.  They cleaned the alarm, reset it and had an electrician take a look at it, but every time they put it back up it went off.

Tom, her three year old son is often heard talking to someone over the baby monitor.  Regina hears a soft buzz and then her son whispering low enough so that she cannot understand what is being said.  When Regina finally got up enough courage to ask him who he was talking too he explained, “I’m talking to my friend, the lady.  The lady that watches me sleep.”  Tom has started to not sleep in his room, preferring to sleep with his mother in her bed.  Recently, Regina was talking with her mother upstairs with the boys asleep in their room.  Her mother heard Tom talking over the monitor and asked what he was doing.  Regina explained to her skeptical mother, Maria’s daughter, who she feels has had things happen to her but refuses to talk about them.  Regina went back downstairs and right before she opened the door to the boys’ room, she heard Tom say, “Shhh,” over the monitor.

There have been other signs that there might be someone else living in the house.  The family dog does not go in the room unless there is someone in it, often circling around the door when it goes by and running from the room into Regina’s lap.  Regina has seen a figure in the hallway out of the corner in her eye.  She has not gotten a solid look, but she knows there is someone there.  Keys hanging from hooks in the hallway start to swing when she feels someone is there.

Lately things have gotten stranger.  Near Halloween she was sleeping in her bed with her son.  From the angle she was at she could see her mirror and through the mirror the reflection from her television.  All of a sudden there was a bright light about the size of a grapefruit in the mirror, slowly moving from side to side.  She tried to rationalize what was happening, thinking it might have been the Halloween lights outside, but she could not tell where the light was coming from.  She closed her eyes, but when she opened them, the light was clearly in the room inches from her, right above her son.  The light then seemed to move into the bathroom, at which point Regina ran into a different room.

A few nights later she was again lying in bed with her son Tom when she felt someone sit on the bed.  She could feel the pressure and thought it might be her husband.  When she looked there was no one there.  She asked, “Nana, is that you?”  The pressure on the bed felt like someone just jumped up and Regina felt as if the room had become suddenly empty.  This experience has confused Regina more than the others.  She always felt the presence was her grandmother, but she does not understand why she would run away when she tried to make contact.

Regina is convinced the spirit is that of Maria, but she is not fully ready to see her grandmother in the kitchen making tea.  “I’m afraid to know.  I like to hear it on the other side but I know it’s not in my head any more.  At some point you have to say, ‘there’s something here.  There’s something going on.”  She feels her grandmother was not ready to die and was on some much medication towards the end she did not know what was happening to her.  If she had, she would have fought it.  She feels Maria wants to see her great-grandchildren grow up and share their experiences.  “She won’t have wanted to miss out on everything she’s missing out on.”  She also feels the nature of what happened points to her grandmother.  “I think the stuff that is happening is her personality.”

Regina also believes the activity will get stronger as Christmas approaches.  “It was her thing,” she says thinking about the holidays spent with her Nana.

Regina has gotten use to the idea of the ghost she might share her house with.  Although she is still not sure what to make of her grandmother, she accepts the signs that are around her.

It was somewhat discouraging for her though.  Just when she was ready to listen to what her grandmother had to say, she stopped talking.  She continued to smell the roses and cigarettes in the bathroom and sometimes felt someone watching her when she was alone, but the lights and noises stopped.  Pretty soon Regina felt her grandmother must have passed on.

That was until Christmas.

Maria had always enjoyed the holidays.  Regina was able to look back on her experiences in the apartment and see her grandmother had always made herself known around Christmas.  She was not really thinking about it when she put up her decorations this year.  There were other things to think about.  Her husband had just gotten out of the hospital with a heart problem.  More importantly, this was the last Christmas they would be in the apartment.  They had bought a house several months before and were only waiting to finish fixing it up before moving in.  When she had purchased the house she had wondered briefly if Maria would move with them.

Tom, now almost five, made his way downstairs from his grandmother’s upstairs.  He stopped to look at the tree and then went into the kitchen to brush his teeth in the sink.

As Regina finished up the last of the decorations, she heard Tom talking from the kitchen.  He was not singing or babbling, but talking in complete sentences with pauses as he was listening to someone else and responding.  Regina thought it must be her father and went it to say hello.

Tom stood alone on his stepladder with his wet hands in the sink.  He was alone.  “Tom, where’s Papa?”

“Well, who were you talking to?”

“The lady with the white hair on the stairs.”

Regina wanted to ask him who the woman was.  What did she look like?  Had you talked to her before?  But all she could do was watch little Tom make his way to the TV room as and think about all the times she had run down those same stairs to go see her grandmother.

One thought on “Grandma’s Raising Your Child”

Would love to know from my witchy friends what plans you have for this full moon…
Is it morally okay to play the ghosts of children?
Playing #hauntedhideandseek with the Richardson children…and reading a little #goodnightmoon in Arcadia…
Something odd happened while visiting the Richardsons…
A little #hauntedstatue and #RAF time before playing with the kids at #oakridgecemetery.
What do you mean? Doesn’t every #legendtrip setup look like this?