I didn’t know what to expect. This really isn’t one of my areas of expertise.

This was a friend of Christopher’s whom I had never met, and being my normally socially awkward self, I was especially nervous about coming into a stranger’s home with the intent of removing a ghost.  Going into someone else’s living space is so very intrusive, so up close and personal to the situation. Rarely do we experience a first hand account when Chris and I are on our trips, so this was a completely different animal.  However I rationalized the event by at least being able to offer an outside perspective and maybe just a shoulder to lean on for this obviously scared and shaken up woman.

The story has been told so I don’t need to go into those details, but the short of it is that Chris’ friend hadn’t actually experienced anything but her family had. Being only a few months post-newborn, she had those newly created mama-bear instincts kick in.  She wanted this spirit gone, mainly to protect her infant. It was slightly overwhelming to think that she was placing her trust and her family’s safety with us.

The odds were stacked against us for my first real investigation.  Honestly, I had never met Nicole (the psychic/medium Christopher discovered) and knew nothing of her genuineness.  Chris is a super brilliant scholar, but I’ve never actually seen him be effective in investigating/removing a spirit.  And me, well I hadn’t even been successful in removing my own ghost. So there was definitely a thought of, “Why are we even here? This is hugely out of our pay-grade,” and, “We should be calling a priest.”

After we actually got set up and began to build a rapport with the family, my natural soothing nature kind of kicked in.  I wanted to fix it. I had to fix the situation. The friend was out of her mind with worry. But this isn’t my thing – although I naturally try to assert myself whenever there’s an issue and take charge – there really wasn’t a tangible solution.  How DO you remove an unwanted ghost, or psychic recording? How do you actually cleanse a space of what you consider a negative or draining energy?

Nicole and Chris obviously took the bull by the horns and each began their own methods of trying to figure out the story and achieve a result. Chris’ approach was one I was slightly familiar with, setting up a camera aimed at the room in question, setting down the recorder in the room, taking a bunch of pictures, and then getting the facts about the experience. Although I learned later that he didn’t actually do everything he had wanted, I thought it was a pretty standard setup.

Nicole on the other hand walked around and got a feel for the room(s), trying to, I assume, soak up the energy and get an idea of what was there. I had messed up in the car on the way over and told her what we had discussed prior to going over there, about us believing it may be an old man that had once lived there – the idea that she clung to. She tried to describe the man, guessing at “old man’s sounding name,” telling us she felt like he was drunk or woozy all the time, and that she felt like he was searching for the wife who had obviously stayed in the room. I tried to talk to the spirit, and asked “him” to leave. Nicole said that confused and upset him.

It was at that point that she “helped” him moved on. She stood in front of the bed, eyes closed hand outstretched at one point, and spoke to the man. She told us she brought him to Archangel Michael, and he helped him go. That the space was now clear. 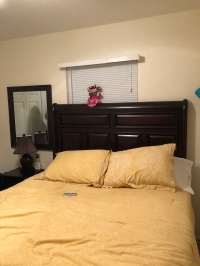 I wasn’t sold on Nicole’s whole moving the spirit along with the assistance of Archangel Michael. The sick feeling was still within the bathroom, and then seeing the ‘kiss’ in the mirror I was freaked. I just observed after that, trying to determine whether the friend and her family were assuaged by Nicole’s actions. There seemed to definitely be a weight lifted, even if partially, on the family’s faces. Relief and hope. Nicole performed Reiki for each of them which aided in that relief too.

Nicole was essentially done with her part of the investigation by this point, and took a backseat while Chris continued.  He directed the friend on how to change the atmosphere. Lighting candles and spraying a salt and water mixture within the rooms. At one point he too had a conversation with whatever was there.

We had done really all we could at this point I suppose. Doing an investigation into activity isn’t the difficult part.  I’ll bet you could realistically find paranormal activity everywhere if you’re looking for it. But that’s just my idea that the other worldly lives amongst us, just in a different dimension coming thru.

Getting rid of that activity is extremely difficult and almost impossible to determine success immediately. Only time was going to tell whether or not Chris and NIcole’s actions actually did anything. But at least Chris’s friend was calmer. That’s all that mattered. Maybe she was able to finally get a good night’s rest that evening (the tequila probably helped, too). 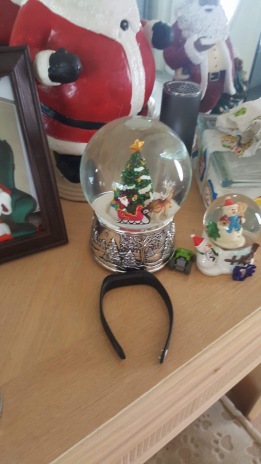 After hearing that there was still activity that evening in the form of a Christmas snowglobe’s song I was disappointed, but not shocked.

It’s probably a very rewarding career or hobby to investigate and assist in matters such as these.  Of course, that’s if you’re successful.  However, to disappoint something who has trusted you is a bit crushing. I wouldn’t consider ever taking this type of activity up on the regular, at least not with the intention of removal. The experience was neat, but mostly I just felt badly for not being able to be useful.

3 thoughts on “Travel Log…Investigating Vs. Tripping”