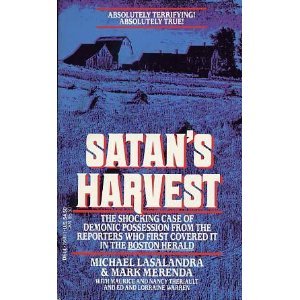 One of the most bizarre cases of demonic possession on record occurred in Massachusetts in the mid-eighties.  The case involved a farmer living in Warren, Ma and was witnessed by reliable sources, including a police officer, and was ultimately resolved by the Ed and Lorraine Warren, New England’s most infamous paranormal investigators.  The entire case is documented in the book Satan’s Harvest by Michael Lasalandra and Mark Merenda with Maurice and Nancy Theriault and Ed and Lorraine Warren published by Dell Publishing (Bantam Doubleday Dell Publishing Group, Inc.) in 1990.

Like most cases of demonic possession, this case begins with a person who unwittingly invited forces into his life.  As a child Maurice “Frenchy” Theriault lived a hard New England life, suffering long hours working on his family farm and dealing with his father’s abusive attitude.  His father alternated between neglect and anger, becoming more and more violent towards his son as Frenchy became older and expecting more from him than can be expected of a young child.  Frenchy began to ask for help at this time, calling upon anyone who would help him and then unknowingly asking Satan to help him through his situation.  It was also during this time that he witnessed something horrific in the farm’s barn that is never explained fully but which is only hinted at as involving sex of some kind.  Frenchy was forced to watch and participate in acts although with who or what we do not know.

Frenchy began to notice differences in himself.  He was able to lift things that no teenager, or full grown adult, should be able to lift and had knowledge of things he had not formally learned.  He eventually was forced to quit school and work full time on the farm.  He tried to join the army when he came of age but was foiled by his father.  He eventually left the house and floated around New England for years doing different jobs and suffering through several relationships.  He settled down in Warren.

In the spring of 1985 the town noticed the first signs of something unusual going on with Frenchy, things that had already began to dominate he and his wife’s lives for years.  He turned his guns in to the sheriff and asked him to not give them back.  At the farm they suffered unexplained terrors.  Blood would randomly appear in the house and on Frenchy.  His unusual strength continued.  The family would hear voices where there was no one around and things would move throughout the house and farm.  Frenchy would often drift away and lose chunks of the day.  Fires broke out on the property, bringing the family to the attention of the local police.

The most disturbing activity involved the appearance of the other Frenchy.  He would be in one room and then appear to his wife outside or in another room.  When she would try to follow her husband he would be gone and she would find him in the room he was in originally, unmoved and unaware of leaving the room.  This sometimes happened in view of other people or when the witnesses could see both men within seconds.

After physical examination and psychological test failed to bring any solution to the situation, the Warrens were called in.  The Warrens were gaining popularity as investigators of the paranormal and had already worked on several famous cases, the most known being the Amityville Horror case in New York that was made into a book and several movies.   Ed Warren had already been classified as the only lay demonologist in the country.  They brought their team in and witnessed dozens of examples of the evil presence and the longer they stayed the more intense the experiences began, often following members back to their houses.  The activity ranged from low level poltergeist activity to physical attacks.  All of the team members, even some stout nonbelievers found themselves involved in activity and uncharacteristic mood changes that could not be traced to normal roots.  Frenchy’s attempts to turn to God for help resulted in more physical attacks.  One night while trying to recite the Hail Mary to make the possession stop he became so violent he tried to choke his wife.

The Warrens made the decision that this was not a normal haunting but a case of possession and called in Bishop Robert McKenna who agreed to perform the exorcism although it had not been official sanctioned by the Church.  After examining Frenchy, Bishop McKenna began the ritual.  During the battle of wills, the demon identified itself by name as “I am what I am” and “You say I am proud” and also invoked the name of Kingdom, often referred to by demons as the legions of evil forces that try to corrupt human.

The exorcism was successful, although Ed Warren almost lost his life and several smaller haunting still occurred on the farm.  There are still questions about what happened on the farm in Central Massachusetts and Frenchy later reputation and activity has cast a shadow on what might have occurred there.   Frenchy was later arrested for sexual abuse of a minor and had much to gain from the insurance on his failed farm that he received from the damage the demon had done.  There was also the money from the sale of the book and notoriety he gained from it.  Those on the inside of the case consider all those involved as being trustworthy and honest in their accounts of the events.