What follows is a mixture of several legends spread about Hulley Tower on the campus of Stetson University.  As part of an ongoing project, it is presented as a legend.  This is a departure from what we usually post because it lacks the commentary and first hand legend trip…that’s to come.  There is something compelling in stories told about the tower, and the deeper we look into them, the more we come to realize school myths are driven by more than what we can prove.  Lies, exaggerations, and the mixing up of facts are as common as cheating on a test or plagiarizing a final report.

Princesses get locked in towers; trapped away waiting for someone to rescue them from dragons and evil stepmothers and witches.  Knights in shining armor aren’t easy to come by, but fairy tales seem to find them, and they’re always ready to do battle and kiss and make the happy ending.

Maybe she’s thinking about that as she stands on the top of the tower counting the bells she has never had a chance to look at up close.  But her knight is not coming.  His horse has left the county and didn’t bother to look back as it made its way past the manicured lawn and into the road that slink its way through the Florida swamp. 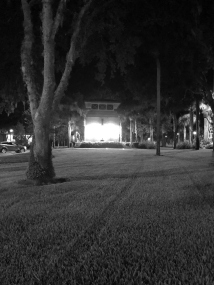 She walked up the tower herself, with no evil anything forcing her up the steps.  She was a young woman, not yet twenty, and when her teacher had shown her the kind of attention her important but formal family never had, Suzanne Brown fell for him the way only a school girl can.  But he was a respected teacher even if he was one of the younger staff members.   When they met by the Hulley Tower for the first time and he held her hand, she awoke for the first time and leaned in when he began to move to kiss her.  In only weeks their hidden meetings had become such a part of their lives they had started making plans for the winter break.

They would meet by the tower to spend a few moments alone in the late hours when Stetson’s campus was asleep.  He would read her poems he wrote for her, and she would gently touch his arm as the words came out more like a song than a poem.  For the rest of the school year and through the hot summer months when she stayed on campus to work, the day was only the time in between their meetings.  It was more than the excitement of an older man or the gimmick of dating a student or the excitement of having to sneak around and avoid curious eyes.  It was love.  As the new school year began and the campus woke up again, whispers began about marriage. 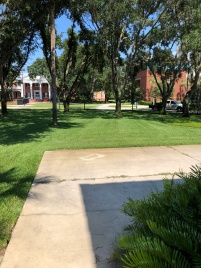 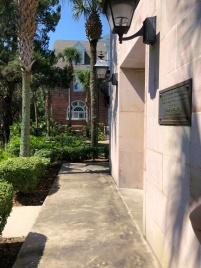 Until, that is, the night a few upperclassmen returning from a late night party and spotted them by the tower.   Before lunch the campus was already buzzing about the scandal, and he wasn’t there to teach his English Lit 1 class that afternoon.  She was brought in later, an hour before the sun started to set.  They explained to her that even the Brown family’s standing and money wasn’t enough.  She would need to leave the school.

She returned to her room to pack her things.  She slipped several pieces of paper in her thin jacket and followed the security guard out the door, taking one last look at the room.  As they crossed the campus, the guard gave her a sorrowful look and told her she could walk the rest of the way herself.  He was sorry.  She tried to smile, but as he walked away she changed directions slightly and made her way to the last place she had seen the man she had wanted to marry.

Now she clutches the poems close to her as she lets one of feet hover off the top and hang in the air. 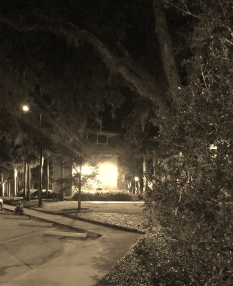 In the moments before she hit the ground she could see a couple making their way across the lawn towards the tower with their dog.  Although she had been told the stories of Lincoln Hulley, the university’s first president,  when she had first arrived on campus, she had been too consumed with her thoughts to pay attention to the etched stone marking where his body was interred as she started up the stairs.  Of course, Eloise, his loving wife and the woman for whom the bells were named, was not buried yet because she was still alive.

But as Suzanne fell she became part of the history of the tower.  For the next eighty years people will see Lincoln and Eloise’s  spirits walking hand in hand near the tower bearing their names and housing their bodies.  In the early morning hours students will see strange lights or shadows, and many will see their full figures, smiling and still very much in love.  Suzanne’s ghost is a bit more elusive.  Her faithful leap is only seen on certain nights in the fall, when the semester is new and everything is still potential, even falling in love with the wrong man and living happily ever after.

You can contact us with questions, comments, and your favorite legend or tidbit of folklore at spookytripping@gmail.com.

We’re still knee deep in the #hauntedlove project, so we’re especially looking for ghost stories with a love twist.

Keep visiting the site for the trip log of our travels and other urban legends at:
www.trippingonlegends.wordpress.com

One thought on “Florida Legend: Hulley Tower at Stetson University”